Eli Manning was MVP and the New York Giants again beat New England with a late rally to win Super Bowl XLVI 21-17 in Indianapolis. What a game it was.

It was deja-vu from four years ago when Eli Manning threw to Plaxico Burress for a last-gasp game winner to end the Patriots winning run in Super Bowl XLII. This time Ahmad Bradshaw scored on a six-yard run with just over a minute remaining to give the Giants a 21-17 victory.

The new NFL season starts off with a Thursday night football game between the Saints and the Packers.

It's been a long off-season and football fans everywhere are looking forward to a return to the action.

The lockout was big news over the summer, and probably the other biggest NFL football story was the news that L.A. is to get it's own team again in the next few years. Speculation is rife as to which franchise will move to the west coast.
The Chargers are just a short distance down the freeway, so they could be looking for a move to that big new football stadium.

Anyways, forget speculation and let's stick to the real world-football is back and it's been too long! 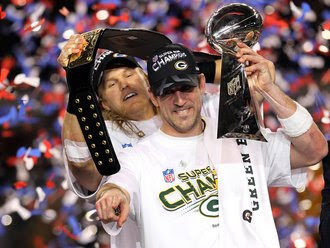 Did you watch it? The Green Bay Packers beat the Pittsburgh Steelers 31-25 to win Super Bowl XLV in Dallas.


The half-time show featured the Black Eyed Peas, and was almost more entertaining than the game.

Super Bowl 45 (XLV) will be a match up between Green Bay Packers Vs. Pittsburgh Steelers.

The Steelers beat the NY Jets 24-19, to clinch the AFC Championship and reserve their spot at the Super Bowl.

The Packers got past the Chicago Bears 21-14 to secure the NFC title and book their place at the Super Bowl extravaganza.

My pick for Super Bowl 45 - the black and yellow machine of Pittsburgh will win it.

You may not care but the CFL Super Bowl, or the Grey Cup as it's called was on yesterday. Canadian Football is not so well followed in the USA but it is a great spectacle. The Montreal Alouettes are Grey Cup Champions for the second straight year after a dramatic 21-18 win over the Saskatchewan Roughriders at Commonwealth Stadium.

I do follow CFL but my team were not in the final. My team is the BC Lions. They play out of BC Place in Vancouver BC. The Lions made it to the playoffs but were beat by the Saskatchewan Roughriders. I have been to a few games in Vancouver and the stadium is pretty cool. The roof is getting replaced right now and will be retractable when it's finished. The new MLS team called the Vancouver Whitecaps will play there too. Each of these teams have websites Vancouver being a high tech hub you would expect them to have.

Find out more about Canadian Football at the CFL website, it ain't so bad.

Some Big shocks in the NFL this week:

Peyton Manning had a dreadful night (San Diego picked off Peyton Manning four times) as Indianapolis were crushed 36-14 at home by San Diego while Chicago continued their great run by beating Philadelphia.

The Bears stunned the Eagles - Jay Cutler starred with four TD passes as Chicago beat Philadelphia 31-26 on Sunday. Where was Vick?

Also...Joe Flacco threw two touchdown passes as Baltimore beat Tampa Bay 17-10. The Ravens did a real job keeping the Buccs to a minimum.

Well week 6 of the NFL already and time is breezing by. My blogging has declined lately due to work and family committments.

Here is some of my top NFL news picks from week 6:

The NFL will clamp down on helmet-to-helmet hits by issuing suspensions rather than fines. - there were some huge hits this week, and after all the brain injury stories in last year it's about time the NFL got tough on this.

Here are the Week 6 NFL Scores:

Well folks, it's been a long wait during the offseason but NFL football is back. Preseason officially kicks off on Sunday August 8 with the Hall of Fame game between the Cincinnati Bengals and the Dallas Cowboys at Fawcett Stadium.

I will preview this game and all the other preseason games in the coming weeks, so stay tuned.